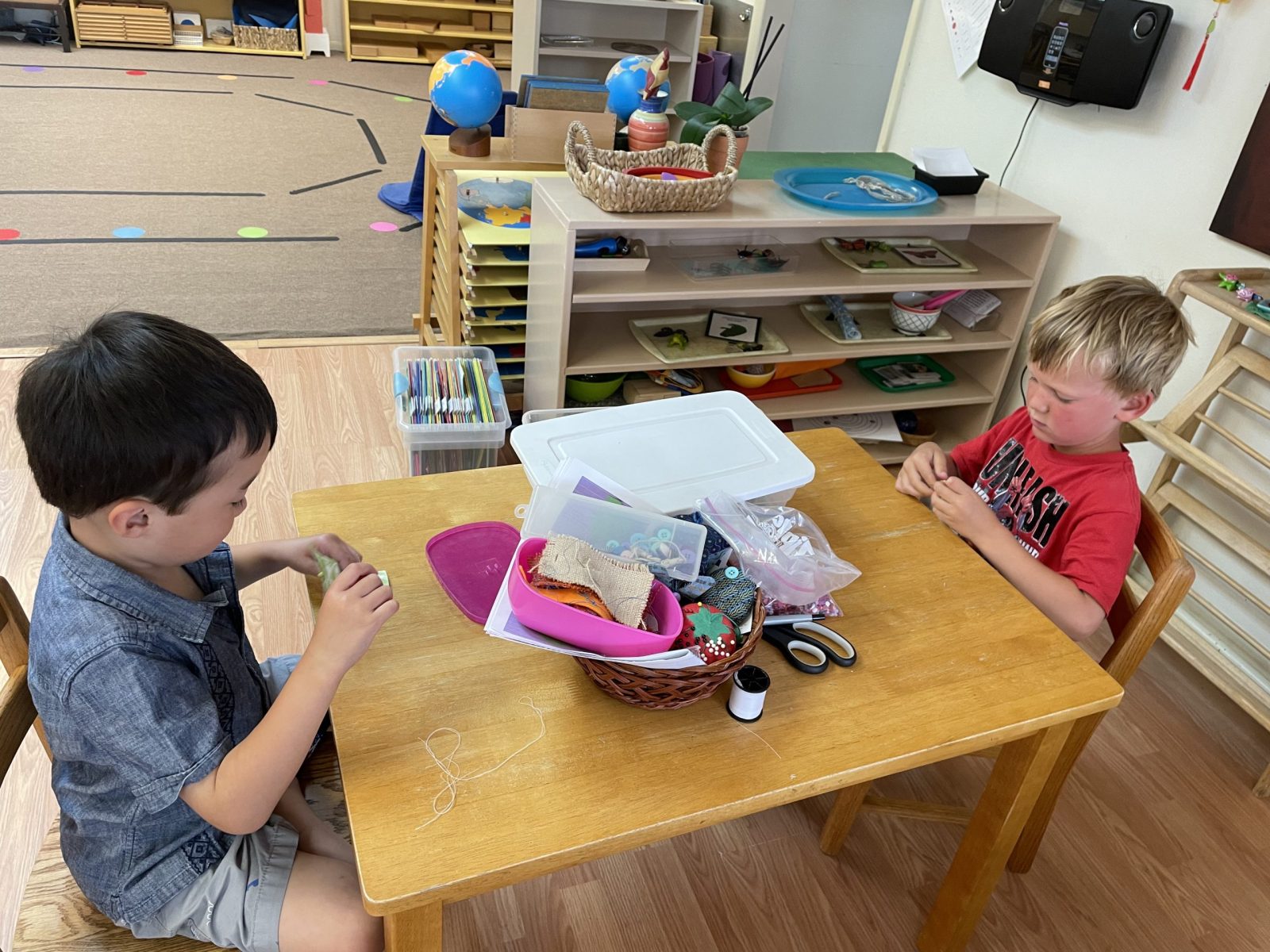 Does my child have to be potty trained?

No, we do not require children to be potty trained. We work with families to provide a positive experience during this phase of life. Children have extra clothes boxes in the bathroom so that supplies are near at hand for those who have an accident. Soiled items are placed in a plastic bag to be taken home at the end of the day. We can accommodate cloth diapers as well as disposables. All children are encouraged to use the restroom at certain times of day, which leads to a logical time span for those still in diapers to have a try.

Is Montessori a trading name or a franchise?

Montessori is a public name and is not copyrighted or franchised. Any school can call itself Montessori, legally. Authentic Montessori schools have credentialed teachers and a full array of specialized Montessori Materials.

What is your adult to child ratio?

We are licensed by the State of Wyoming and adhere to those rules, usually allowing for a lower ratio than required. We are licensed for 25 children each day, and can accommodate 10, 12, or 15 children per teacher depending on the age mix. Usually we have two teachers for 15 to 20 children ages 3-6.

Is there an advantage to having my child attend Montessori for the Kindergarten year?

The advantages for allowing a child to stay in Montessori for the third year of the primary class age span are many. Because the materials found in a Montessori classroom build on the knowledge gained over a three-year age span, the Kindergarten year is key for individual growth and achievement. The most important reason to have a child stick with Montessori through the Kindergarten year is due to differing developmental stages between five year olds and six year olds. A Montessori preschool is designed to support development within the three-year age span, and leaving before development is completed is regrettable. Another issue has to do with the reality that children who attend a good Montessori school are typically far advanced academically and more self-assured and socially mature than those in other Kindergarten programs. When a child is placed into a program with lower academic expectations, there can be difficulties due to boredom. Also, the Montessori curriculum emphasizes movement as a key to learning, which is not the case in traditional Kindergarten classrooms.

Is there a Financial Aid program?

There are occasional opportunities for families to work at the school and reduce tuition, and we do offer up to 5% of children enrolled some form of tuition assistance. These opportunities might consist of making materials, providing repair and maintenance, or other goods and services. These opportunities are not always available.

Do you have a waitlist?

Yes, we maintain a wait list for families wishing to enroll in the future. Turning in admission forms as soon as possible will help us plan our mutual future relationship. Enrollment is accepted on a rolling basis when space allows, and is configured closely to the local public school calendar, with a regular school year and summer school sessions.

Do you go outside every day?

Yes, we take the children outside every day, weather permitting. Our policy is to go outside each morning around 11:15 as long as the temperature is at least 10 degrees F, and there is no rain or lightning.

Do you take Field Trips?

We take many field trips throughout the year. We use the public START bus system to visit the Library, local parks, and attend special events at the Center for the Arts and other venues. We are located close to Snow King, and often take hikes on the paths there.

Do you provide lunch and snacks?

Families provide lunch each day for their child, and we have occasional “Leave the Lunchbox at Home” days when the children help make lunch, or we may ask for money to be left at school so we can go out to lunch or have some food delivered.  We provide snack items and a choice of organic 2% milk or soy milk at lunch time.

Are you open year-round?

We are open year round, and we loosely follow the Teton County School District calendar. We close between Christmas and New Year’s Day for Winter Break, and usually have two weeks for Spring Break at the end of March/beginning of April.

Can my child come two or three days per week?

Yes, we are as flexible as we can be with scheduling to accommodate you.  We have school day only options and the opportunity for children to be here before and after those hours for working parents.  There are a few restrictions on scheduling that help us make sure children have the best experience at school: Children must come at least two full days per week, and Fridays are not available for part time enrollment.

How old must my child be?

We enroll children ages 2½ through 6. Children who are 2½ may come to school two half days per week on a trial basis if parents wish, so we can evaluate readiness as a team.

Why is everything in the classroom considered “work?” Don’t the children get to play?

Dr. Montessori observed that children’s play is their work. Because children expend so much effort to master their bodies and absorb meaning from everything found in their environment, we use the term “work” out of respect for that effort. Montessori children work hard at everything they do, and they find a sense of peace and fulfillment with the successful completion of an activity.

How is Montessori different from traditional childcare?

The basic difference between a Montessori program and others is the emphasis on the individual child. Traditional preschool and childcare programs teach the same educational concept to everybody at the same time. Children are broken into groups of the same ages as well. Montessori programs group children in age ranges of about three years, and each individual child is observed and introduced to educational concepts when the child is ready. The age groupings foster a sense of community by allowing the older children to help prepare and teach younger children. Teaching concepts allows the older children to internalize the lessons and gain deeper understanding and knowledge. Montessori classrooms work on the concept of freedom within limits. Children help set basic ground rules as a group, which allows them to take ownership of those rules and learn to work well with each other in the classroom community.

Do you accommodate children with disabilities?

Yes, we often have children with various learning issues and disabilities. We work in conjunction with therapists to provide special educational therapies within our school setting. In fact, Dr. Montessori began her work with children who had severe mental and physical disabilities, so our method of education and the Montessori Materials found in our school help all children develop at their own pace, fast or slow.

How do children adapt to school after Montessori preschool?

There is always some period of adjustment for any change in a child’s life, but over time we have found that our children adapt well to any of the elementary school options available in Teton County. Many teachers have commented on how much they enjoy the children from our school because they come ready to learn, ask pertinent questions, can organize their thoughts and activities, and have basic knowledge that helps them build on their educational experiences.